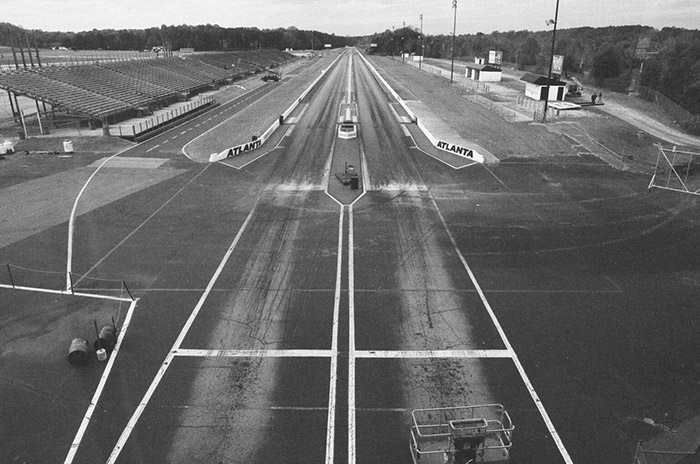 The Final Days of Atlanta Dragway

On October 25th, 2021, I was fortunate enough for the opportunity to document the final days of Commerce, Georgia’s Atlanta Dragway just five days from the exchange of ownership and the demolition of the 45 year-old racetrack.

The track was officially closed to the public after the “Night of Fire” on October 16th, 2021.

Technically demolition was well underway when these photographs were taken, however much was still intact.

The race shop out back had already been fairly gutted to a shell of it’s original form.

However, inside there were still the signs of life that once lived in the bustling shop.

Although it’s easy to focus on the ruin, that was far from my intention. Knowing that this track had a 45-year run as the Atlanta-area’s premiere dragway really made me feel that this was an important place to… at the very least… make the stamp in time that these photographs represent.

However, the sadness that I felt was palpable to say the least. This place was an epicenter for this community… and to see it forced into the history books in lieu of space to build warehouses is a painful pill for race fans to swallow.

Atlanta Dragway felt impervious to time. It was just one of those places I had faith would always be there.

So many amazing stories have surfaced as a result of the track closing. Everyone seems to have one, and I’ve loved hearing them all. However… those stories and that community isn’t quantifiable on paper. It isn’t a line-item that an accountant can bank on. Sometimes the the car that SHOULD win… comes in a close second.

Ultimately… someone made the call to close it’s doors.

If only we could contest the results.

It certainly isn’t all sad… there is plenty to be thankful for! This track led an incredible 45-year life and definitely impacted everyone who got to be a part of it’s legacy along the way. From the racers, to the fans… this place left it’s mark. Ultimately, I’d like to think it’s a tire mark from a big ol’ smokey burnout.

This view of the track from the toilet in the Mello Yello suite definitely made me laugh. This was really the only place in the entire facility that you could take a #2 and watch the battle for #1.

The staging lanes as seen from the suite level. It’s hard to even fathom how many cars passed through these lanes o’er the years.

The tree had already been removed, but the final presenting sponsor was still on the ground.

The view facing the starting line.

The view of the starting line from the end of the track.

The sand trap at the end of the dragway… both the literal and figurative end of the line.

This will be my last memory of this place. It felt like a fitting tribute to get to run this strip one final time from the bed of a pickup truck. Bittersweet would be an understatement.

I have to thank my good friend, Kevin Kennedy (pictured below)… and Chad and Jodee Kennedy for this incredible opportunity. They made this happen… and without doing so… I don’t know if anyone would have recorded the time that was Atlanta Dragway at it’s very end.

It was truly an honor to document this place was before it became one with the history books. I hope in another 45 years we can all look back at these photos and say “Atlanta Dragway… those were the days”.