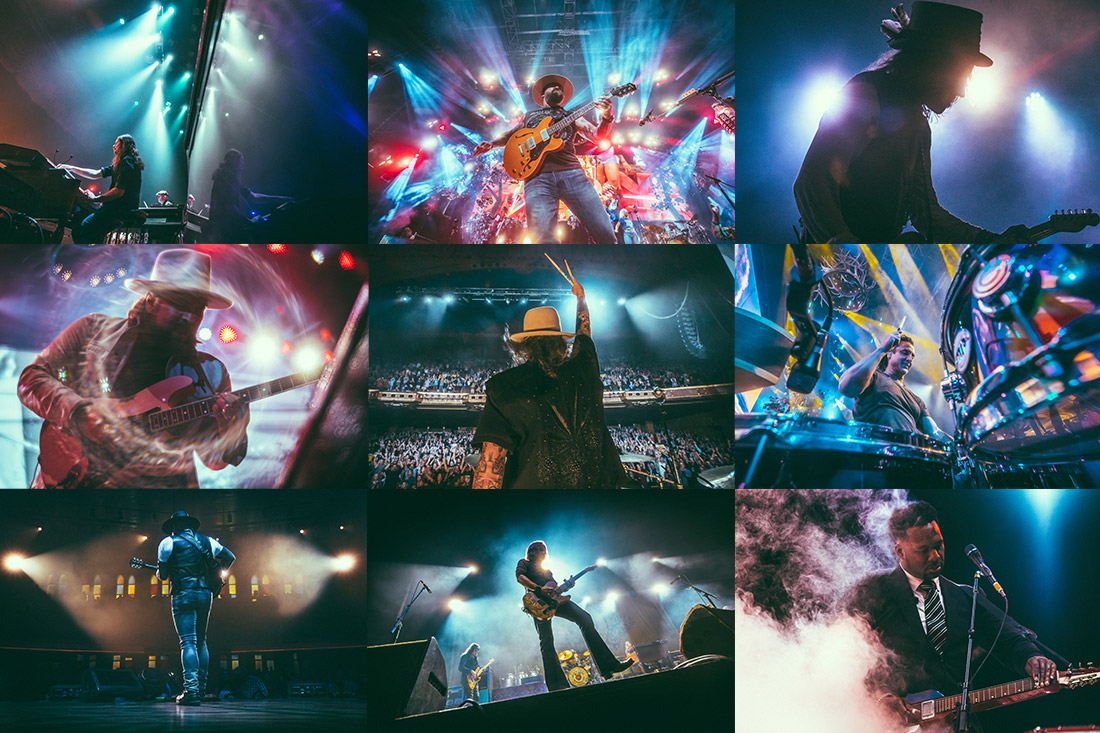 It was another great year out on the road with two of the best bands on the planet. Let’s dive right into some favorites from the year… starting with Zac Brown Band’s “Out in the Middle” tour!

The year started out strong with this explosive moment with Zac from Truist Park. There is a real sense of power to it that you don’t even need to hear the music to feel.

The insane lens flare in this moment with Coy made this a stand-out for the year. I experiment with several old and risky manual lenses that either hit just right… or not at all. But when they hit… they make for a truly unique look.

This quiet moment with Clay is another example of this, sans-flare. It has been a career-long goal of mine to visually articulate the dream-like quality of this world on-stage, and these really accomplish that.

The vibrant colors and repeating shapes landed this one of Danny in my favorites for the year.

This colorful moment with Sweets falls into the same category. I know I’ve said it before, but drummers are always tough to shoot… so I am always happy when I get moments like this where everything lines up just right.

One thing I really focused on this past year is use of color. The very nature of these lighting conditions is already extreme, but I have really enjoyed trying to push more vibrance into my work without being too heavy-handed.

The same applies here. I love the pseudo-sunburst that the roof structure of the venue makes around Matt’s head. Leading lines a-plenty in this one.

Robert Randolph was out on this tour, and would sit in with ZBB each night. This moment with his pedal steel in the reflection of his sunglasses was the only one of it’s kind. The photographs before and after had no reflection at all. I have always said so much of this line of work is luck… and I am thankful for any of that luck I can get!

Another killer moment with Robert. The way the low fog crept up and off the back of him really made it look like he and his playing were on fire!

I try to keep these best-of recaps limited to the stage… but this backstage moment was too good to pass up. I have dreamt of capturing an image like this of this band at this venue since I started working with them in 2012. I am confident I would have failed miserably if attempted back then… so I am grateful for the journey I have had as a photographer to be able to capture it to this degree a decade later.

Later that evening… this quiet moment with Zac from The Ryman Auditorium was an easy stand-out for the year. It feels iconic… and is another that I feel fortunate to have captured.

Historically, The Hollywood Bowl has been incredibly restrictive on where photographers are permitted to shoot from. Thankfully, they are actively working to change that. Never would I have guessed I would capture a moment like this there. I love how the orange light reflecting off the face of the iconic bandshell mimics the strength of the sound waves being emitted from the stage.

I would be hard-pressed to leave this moment from the Rock and Roll Hall of Fame induction off the list. Television tapings are always wildly difficult to shoot, with a slew of restrictions and extra elements to combat – if you’re even permitted to shoot at all. Luckily, this image was everything I had hoped to capture from this historic event. It very much reminds me of this 2014 moment with Bruce Springsteen and Dave Grohl where the stars aligned under similar circumstances in the same way.

Speaking of Springsteen, I’ll wrap up the ZBB portion with one last special moment… with man who has undoubtably been a source of inspiration to me as a music photographer. Here we see him photographing this band in front of a sold-out baseball stadium in Queens. It was an honor and a pleasure to share the stage for the evening with the inimitable Danny Clinch.

I had a blast out on the road this year with Blackberry Smoke for “The Whippoorwill 10-Year Anniversary” tour! This happy accident occurred as I fell backwards while crouched in front of the stage. I am not a fan of “the Dutch angle”… but it seems to work here! I think it has everything to do with the way Charlie is leaning back with it… and possibly how disoriented I was as the photograph was taken.

I really like the way the lens hood on this fisheye crept in to frame Brandon here. These lenses distort everything so heavily that the extra negative space encroaching on the plethora of color adds a welcomed element. The leading lines in this one are 10/10 as well.

The sharp lighting is everything in this moment with Paul. Here we see him throwing his fist in the air just before slamming it back down on his Gibson to hit the final note of the song.

I love a good quiet moment on-stage, and this one with Brit is no exception. You can almost hear that shaker!

Sometimes simple is the best… and it doesn’t get simpler than a silhouette. I really like how the light bled around him from both sides, almost as if he was wrapped in it.

This moment warming up at The Shed feels quintessentially Richard. Just look at those custom wardrobe cases! I need a few of those for my house.

I flubbed this shot last year at The Shed, so this was my attempt at redemption. I am always striving to capture moments that will stand the test of time. Nothing quite screams timeless like that classic Harley-Davidson logo!

This moment screams out headlights in the night to me. This venue’s haze got out of control… but I secretly loved it because it created such a different atmosphere to shoot in for the evening.

Benji is tough to capture because of his position on stage. I often can’t get to a good place to photograph him how I would like. In order to get this shot, I had to lay on my back under a riser and shoot upside down, one-handed through the legs of a barstool. It was a gamble, but it paid off!

Shot from underneath the drum riser… this photograph of Benji, Charlie, and Richard is the moment the three of them realized that the thing popping out from under the riser was my camera. There is just barely enough room for me to belly crawl in/out of there… so seeing a lens pop out from underneath would be quite the surprise to look back and see!

I am always trying to incorporate the venues into these images. I love when the architecture is overly ornate… because it adds a layer of detail that is unique to that specific city, and that specific show.

I really enjoy the challenges that stem from working with different lighting directors and different lighting packages. It keeps me on me toes trying to maximize every available option. This moment with Brandon reflecting in the Leslie cabinet felt like squeezing every last drop of that good light that I could get!

I undoubtedly saved the best for last. If I had to choose one image as my favorite for 2022… this would be it. Brit is hands down one of the most important people in my life. He is a friend, a mentor, and someone I have looked up to in SO many ways for over 22 years. Just weeks before this moment was captured, Brit underwent brain surgery to remove a tumor and just before this show he was diagnosed with glioblastoma. He had one hell of a rough year leading up to this point… including a heart-attack just a few months prior.

Playing the Fox Theatre to a sold-out hometown crowd was a lifelong achievement for him. For this be his first show back after that brain surgery meant more than anyone could ever possibly put into words.
It was everything.

Without Brit… there would not be a single live music photograph on this site. Not one. My life would never have taken the path that it has, and it certainly never would have detoured into the world of live music. I owe that entirely to him. I feel eternally grateful that my life as an artist and every single decision I have made along the way led me to this exact point in time so that I could be the one to capture this moment taken during his emotional standing ovation. I cannot think of another moment I have captured that means more.
It is everything.

That wraps things up for 2022! I hope you’ve enjoyed going through my favorites from the past year as much as I have! I will see you on the road in 2023!