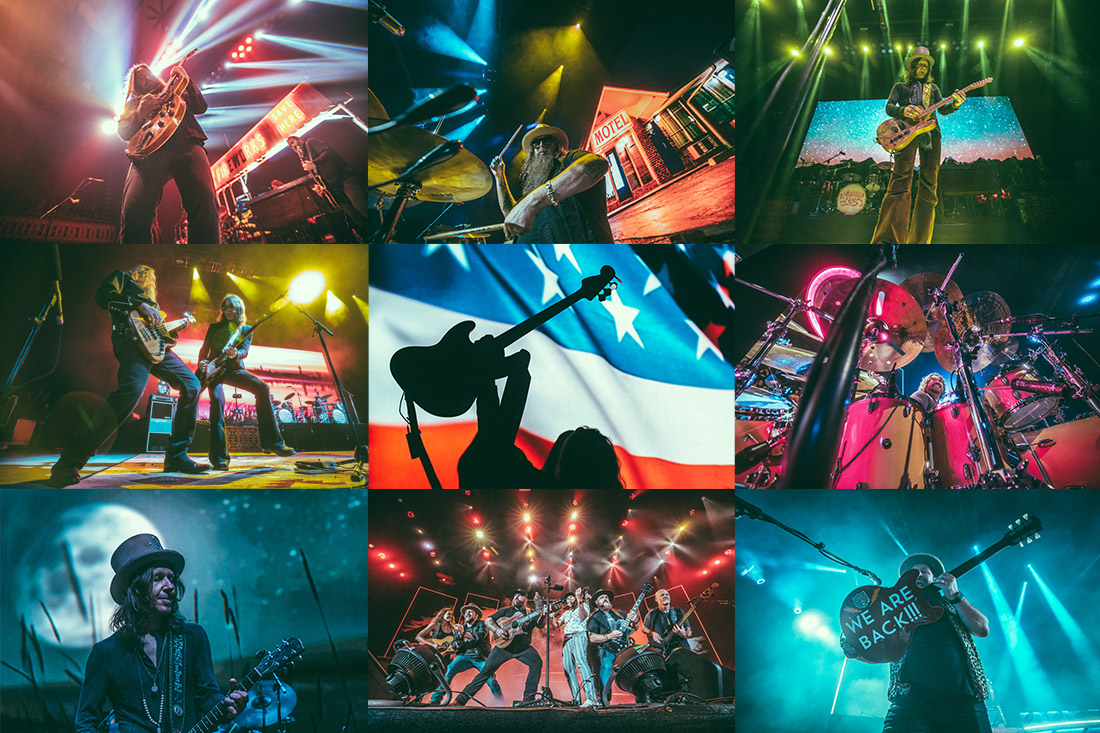 Touring and shooting live music took the heaviest of hits in 2020. In all honesty I was unsure if it would ever return… so career-wise, I made a slight pivot. Much to my surprise, live music managed to make the strongest of comebacks… and boy was it missed!!

In 2021, my production company Freedom Machine, gained traction and I found myself working on several different tours, directing music videos, as well as digging back heavily into graphic/motion design, which had taken a bit of a back-seat to tour photography over the past decade.

In addition to photographing on tour, I did a lot of work on the live/tour visuals side of production. I have had my hands in this arena in the past, but this was the first time I had supplied content for entire tours. It was an overwhelming undertaking!

I took a deep dive on liquid light shows and how those visuals were made in the 60’s and 70’s… recreating them the same way, huddled over a light table swirling oil and water… but adding a modern twist to create some really unique looks to compliment the music for both Blackberry Smoke’s Spirit of the South and Allman Betts Band’s Allman Family Revival tours.

Working alongside Chris “Thumper” Hathaway’s lighting design, we were able to create some killer stage looks for Blackberry Smoke! This one is especially near-and-dear to my heart… because the truck stop that was home to this neon sign was my all-time favorite… and has long-since been torn down. It made me immensely happy to pay homage to it night-after-night.

I really enjoy creating the looks/content for the video wall because it lends an extra element to the images knowing that I had more of a hand in crafting them past simply snapping the shutter. It also gives me a better perspective on when/where I need to be to photograph the show.

In some cases… this creates opportunities to create truly iconic images. This powerful moment with Richard being my favorite from the entire Spirit of the South tour.

I always try to photograph musicians in such a way so they feel larger than life. This one of Charlie towering over The Tabernacle being no exception.

I love this shot of Brandon because the haze settled around him in such a way that it looked like he was setting keyboard world ablaze playin’ all ’em hot licks!

Shooting rock’n’roll never gets old… especially when the band is in the pocket doing what they do best! This shot of Richard and Charlie definitely fits that bill.

Despite all of the years of snapping these Zac Brown Band formations during “Devil Went Down to Georgia”… the excitement never seems to fade when all of the elements line up. It doesn’t always happen, but when it does… it’s electric!

I captured a similar moment in almost the exact same spot with Clay at Fenway Park back in 2015… but this one stood out to me because of the stark contrast between the two. It goes to show the difference the lighting truly makes… and LD’s like Chris Cockrill sure do make things easy!

Typically, the drummers are always the toughest to photograph. They’re the most difficult to get to without being totally exposed to the audience, which is frowned upon. This moment with Sweets is another shot where the planets aligned to create an easy favorite for the year.

Sometimes it isn’t the big energetic moments… but the quiet ones in-between. This innocent moment just before Caroline Jones realized I was even in Colorado photographing them was definitely one of those.

Another one of those in-between moments that stood out to me was Zac and Coy showing their utmost respect to Marcus King after he absolutely destroyed the guitar solo during his sit-in.

I’ll wrap things up with this moment from Fenway Park. If ever there were a moment to symbolize the pandemic in the rear-view and live music being back… this would be it. Clearly a far cry from what the end of touring looked like in 2020.

Thanks for taking a stroll back through last year’s moments with me… hopefully I’ll see you on the road in 2022!