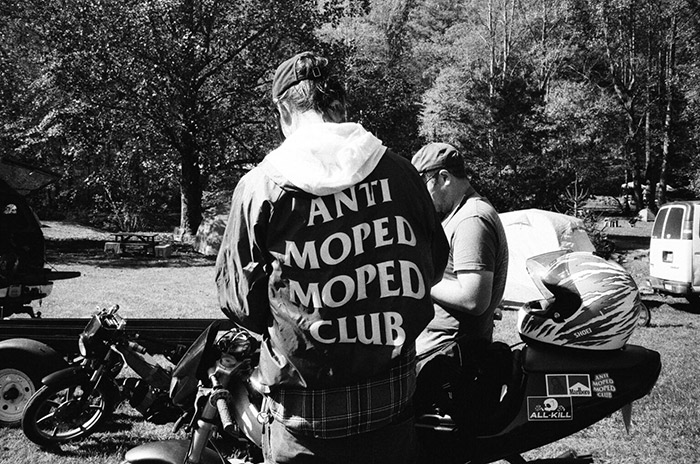 True Grits with The Swoops

Back in October, the morning after the Lonesome for a Livin’ shoot in Nashville, I hightailed it to Suches, Georgia to meet up with The Swoops for the annual True Grits 50cc Fun Run… a timed 63-mile “rally” through the North Georgia mountains. It had been a decade since my last opportunity to attend this event… so needless to say I was o’er the moon for some slow-goin’ moped fun with some ol’ friends.

I’ve mentioned it on here before… but mopeds were my entry into all things motorcycle. I originally picked up this ol’ Tomos from my friend, Chad Copeland, after he wrecked it in 2010. It has undergone quite the transformation since then. This was the first True Grits for this iteration of this bike. Only the frame, motor, and seat saw the last event. Everything else was entirely redone in 2019.

These bikes aren’t blisteringly fast… but 50+ mph downhill with the wind behind you is plenty quick considering they feel like they’re going to rattle themselves apart at any given moment. They’re stupid. They’re fun. And yes… they’re stupid fun!

One of the reasons I love mopeds so much… is because they are about as opposite of serious as you can get. And if you’re taking them seriously… you’re doin’ it wrong. You just can’t help but smile from ear-to-ear when swarming around on one.

Mopeds are way more about enjoying the ride and the camaraderie that comes along with it. Like all 2-wheeled adventures… even the break-downs are somehow fun. Which is a good thing… because these machines’ll do just that!

Luckily, my bike held up surprisingly well considering she’s been sitting unridden as long as she has. 63 miles at WOT ain’t exactly babying it.

Back to the lodge at Two Wheels of Suches, your day ain’t o’er ’til you turn in your timecard.

You turn that timecard into Mr. True Grits himself… Ben Cheatwood. He started this event in 1982!!

To say I hope the planets align schedule-wise for next year’s event would be an understatement! I had an absolute blast… both literally and figuratively! I wound up shooting a few cartridges of super 8mm and cut a li’l short film together to mark the occasion. Enjoy!