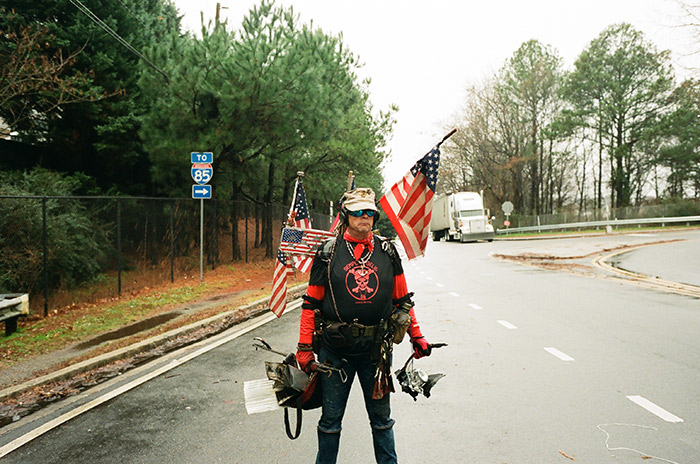 It goes without saying that 2020 was an absolute train wreck of a year. It wreaked havoc on everyone across the globe in more ways than you can shake a stick at. With that in mind, I would like to stray from the previous year’s “favorites” format and use some of these moments to help tell the story of the year… which started out like any other.

In February I rode down to reconnect with a dear childhood friend, Chris Bee, who had sailed from Lake Champlain, New York to Savannah, Georgia… all by his lonesome. The stories he had to share… from making it around Cape Fear (which is ill-advised, alone), all the way to being granted permission to dock right downtown on the Savannah River (where boats aren’t allowed to dock) were all amazing! Sleeping on the boat as the freighters passed all night was definitely an experience! It meant the world to spend some time with him along his journey.

On the way back North, I stopped off for fuel encountering these two scenes. I could tell that Me-Ma’s was a bonafide “choke and puke”… long-since closed down. I wish I could have seen it in it’s heyday and hear the stories it could tell!

There were two truckers across the street attempting to fix their rig… but it was a quiet spot. After a brief chat with a local mechanic that walked over to talk about old bikes… and I sat on mine and enjoyed the last bit of sun o’er the horizon behind the diner while a tractor plowed a nearby field.

Back home, I spotted this man as I was getting on the interstate, and sped like a maniac to make my way back around to him. I tried talking with him for a few minutes, but he was too amped up about conspiracies and seemed more interested in keeping on. This portrait I snapped of him was easily my favorite of the year.

Tour was starting back up… and with it, a fortunate opportunity to roll with these two gentleman, Kevin Kennedy and Jeremy Payne, to Iowa 80 in a Peterbilt 389… where I later got to drive the rig to Iowa City and back. It was an unforgettable night on the road, and I will always cherish this shot of the two of them in the chrome shop at the World’s Largest Truck Stop.

I spent two evenings o’er at Iowa 80 in an attempt to chip away at a long-term project… and walked away with a few 35mm panoramas to add to it.

Shortly thereafter, without any warning… the virus hit. Months of self-imposed isolation and shelter-in-place ensued.

Throughout the year I spent a lot of time with my family. I love photographing them more than anything else… and don’t normally share them outside of with those I care about. But I cannot tell the story of 2020 without these moments. The are very special to me and were instrumental in making it through the perils of the year in good spirits.

Eventually I made my way back out into the world… spending a good bit of time on my motorcycle in the North Georgia mountains.

Once the world truly started to open back up and life began returning to a new normal… I began traveling again to work with Blackberry Smoke on a plethora of new projects. This photograph from their show at The Ryman Auditorium of a masked-up Roy Acuff and Minnie Pearl already feels like that stamp in time that says so much about the state of affairs from when the image was taken.

This gentleman saw me photographing an old squarebody, and turned around to emphatically tell me about the Book of Job. He had a hand-written copy that he tried to pass on to me. Instead, we settled on a few photos that I could take so that he would get to keep his copy for someone else.

I stopped along the side of the road to photograph this C10, when the owner walked over and struck up a conversation. He was very concerned about child trafficking Satanists, as can be seen by the paint job on the truck. We talked about old Chevrolet’s for a bit and he obliged me this portrait as I was on my way.

All of the post-lockdown travel I did this past year was done from the cab of my truck along backroads away from the interstate… which revealed several parts of the country, specifically The South, that I had never seen before.

The folks o’er at Hoonigan invited me to shoot behind-the-scenes as Travis Pastrana took the torch for Gymkhana 11. On the action-side of things I felt like a fish out of water… but managed to snap a few that I was proud of. It sure puts a smile on my face to know they’re on celluloid.

On location, I met a local by the name of King. He rode his bicycle to the end of the street to see what the commotion was about.

After bonding o’er my Richard Petty hat, he graciously gave us a tour around his property to show me his old dirt track chassis and Volkswagen Thing.

The folklore I later learned is that he had allegedly killed is Russian mail-order bride, who is buried on the property. However… King couldn’t have been nicer to me, and regardless of that lore… I enjoyed talking with him and appreciated his hospitality in showing us around.

After my stint in Maryland, I boogied up to Albany to spend some time with one of my best, best friends… Clair Bee and his family. My arrival was a surprise. I didn’t tell him until I was standing outside his house. To say this was a highlight of the year would be a massive understatement. Clair is one of my oldest friends, and this time together was priceless!

During my stay with them, his oldest daughter, Louisa, had her tenth birthday… and I love this moment just seconds before the wish was made and the candles blown out.

Every time I am upstate, I make a pilgrimage to our ol’ house. En-route, I passed this garage and was blown away that it had deteriorated to this extent. Last I can recall, this was still a functioning business.

This place. I was thrown in the back of a patrol car for writing graffiti on the abutments here when I was in high school. I can recall running across those train tracks like the scene in Stand By Me. The childhood memories here are forever vivid… and always bring me back to visit. The crisp morning here after the first snowfall of the year was definitely a treat.

Headed back South… I went very out of my way to photograph this cabover that I had noticed Northbound. The election was a month away at this point, and I wanted the stamp in time that this scene was indicative of to me.

Mr. Turner and I made a few trips back-and-forth to Alabama getting his Silver Eagle bus up-to-speed at a shop that specializes in these ol’ rigs.

I love this candid snap of the bus mechanic Andrew, his wife, and li’l boy sitting behind Brit’s bus.

I also wound up with a welcomed dose of lowrider culture back in my life. Lowriders were how I got into wrenching/modifying cars in the first place (thanks, Clair!)… so I am definitely hoping (hopping?) for more of this in the future.

This quick snap of Brit sitting in his C10 while the Krazy Vatos gents installed a new motor in one of the pumps on the truck’s hydraulic setup definitely wound up a favorite for the year.

Looking back on all of my photographs from 2020, it’s clear to me that despite the unwanted aspects that forced their way in… it was still a good year. Life went on and there was plenty of beauty to experience along the way.

Best of all… when things slowed down I wound up with a piece of my life back that had been missing for quite some time.

Thanks for taking a (rather long) stroll back through time with me! It’s honestly been cathartic to see what kind of year it really was. It’s so easy to get caught up in the negatives these days, that it felt good to focus on all the positives. Here’s to an even better 2021!