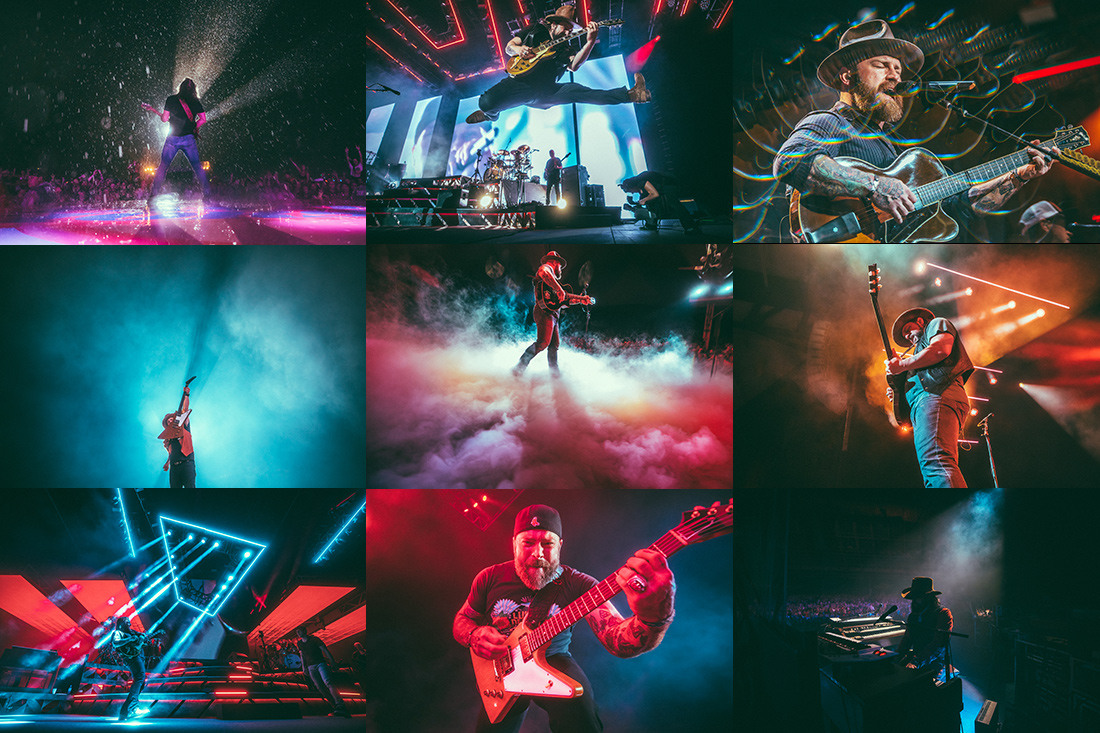 Another year has and with it… another incredible year on the road. There were plenty of big Zac Brown Band moments from The Owl tour. Let’s take a look back at some of my favorites!

I’ve mentioned it before, but there is always some magic surrounding the first few shows of a tour. This one from the tour-opener in Tulsa feels quiet and surreal… but the look of wonderment from the crowd really ties it all together.

This moment looks like Coy is literally being abducted by aliens. The stage and lighting design for this tour unlike anything I’ve ever seen. Those gigantic LED panels have swiveled 90°, and the trapezoid lowers down out of the ceiling at an angle to highlight Coy’s solo during this song. So many pre-planned elements coming together to create one oment.

The guitar duel is always a crowd (and crew) favorite! I feel like the playful nature and camaraderie between these two world-class musicians makes for an incredibly entertaining part of the show. Although this shot might be one of the simpler compositions of these battles… To me, it shows how balanced the duels actually were.

In my never-ending pursuit of visually powerful, yet beautifully quiet moments… this brief moment with Clay fits the bill perfectly. The subtle hits of color on his clothing feel like a whisper, yet somehow the whole image poetically screams in that very same silence.

Sometimes I believe the geography of the locations of these shows manages to trickle influence into my work… unbeknownst to me at the time. This moment of Zac was captured in Bethel Woods, New York… the same Bethel Woods that over 400,000 people gathered in 1969 for Woodstock. This effect was achieved entirely in-camera and may have been subconsciously altered by the brown acid taken on-site 50 years prior.

I experimented a lot more with in-camera techniques across the span of this tour. Although I never quite cracked the code, I certainly had breakthroughs… this moment with Matt outside of Pittsburgh one of them.

More proof of Coy’s seemingly superhuman ability to leap to the heavens from a dead-stand. Despite witnessing these feats night-after-night… they still seem totally unreal.

In my seven years on the road with this band, this was certainly a first! The energy was absolutely electric as the 40,000 fans were being drenched with rain at Faster Horses… and the boys in the band wanted in on it too! This was honestly one of the most epic shows I have ever seen this band perform. I could fill an entire post with favorites from this show… but I will keep it concise with these two.

I can barely remember a time in my life when I was more soaked than this show. It took nearly three days for my boots to dry out. One of my cameras fritzed out and broke due to moisture from the rain. Was it worth it? Absolutely.

The colorful angles in this moment with Coy feel like an abstract painting and a subconscious throwback to my art history classes growing up.

As far as epic moments from last year’s tour goes… Coy is definitely this year’s all-star! Totally isolated in a sea of haze and colorful light, it doesn’t even seem like this was taken on the same stage as the rest of the show!

It was tough to whittle down epic shots of Zac like this to just one single moment. Although for the most part, he truly makes me work for my photographs… every once in a while he plays to the camera which always makes for a great shot. Ultimately, I chose this one because of the historical significance this band has with Fenway Park. If you look closely, you’ll see the honorary World Series ring that was given to Zac by the Boston Red Sox just two hours prior.

A shroud of mystery with Hop in Las Vegas. He feels towering and really seems larger than life. I love the minute detail of the guitar pick lining up with the angle of his sleeve.

I banked on luck this moment… but cashed it in full. This was a perfect storm and blends a wondrous wash of color and texture. It looks like Zac is literally walking on a cloud. This moment stands out from the rest in my eye and is easily my favorite photograph from last year’s tour.

I’ll wrap up this recap with a farewell. This is how each show from The Owl Tour ended… so it seems fitting for this look back to follow suit. I am eternally grateful for the opportunity to chase this band around the globe and document these epic moments. It is a responsibility that I do not take lightly… or for granted. Thanks for taking a walk back through these favorite moments with me… I’ll see you on the road in 2020!