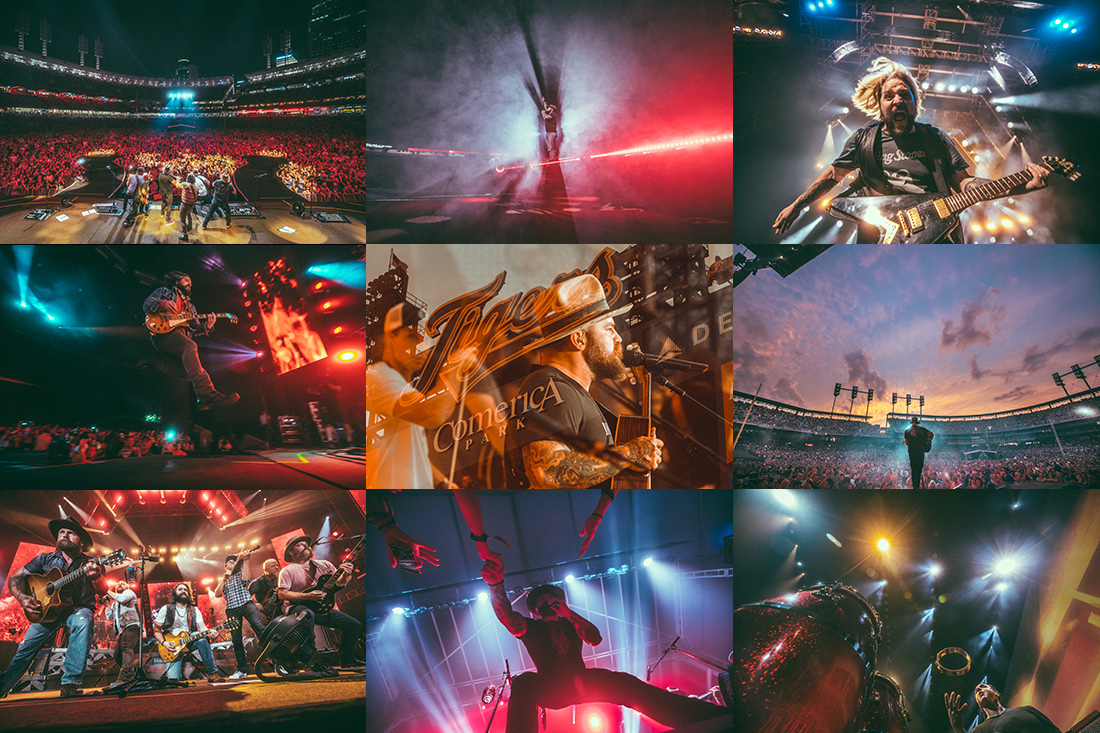 This past year certainly had it’s fair share of epic moments from the road. As a photographer, I certainly tumbled further down the rabbit hole… as did Zac Brown Band on this tour. Let’s take a look!

Always a personal favorite show of mine to shoot, the Houston Livestock Show and Rodeo never fails to deliver amazing moments unlike any other show of the year. The star-shaped stage is in a constant state of rotation, which definitely keeps you on your toes! This moment is an easy stand-out for obvious reasons.

I always try for this angle of these moments to try and figuratively bridge the gap between the band and the fans. I love that the support beams on the stage roof provide leading lines directly to Zac’s face.

Fan interaction is such a major aspect of these shows. It isn’t always easy to do that justice, so I am happy when things align just right to convey the feeling in that moment.

Forever hunting new perspectives of this stage show… capturing this moment was uncomfortable to say the least! There is just enough room underneath this part of the stage riser to lay flat on your back. It takes about half of a song to crawl into this space and get back out. Because of the severe lack of maneuverability in this space… I had to shoot this moment upside down looking through this sliver in the riser’s fascia. It was well worth the effort!

The quiet moments on stage tend to stand out for me just as much as the ones at full-volume. This one with Clay and Coy just before the stage curtain went up is no exception. The leading lines that the curtain provide make this moment sing to me.

Sometimes it is the happy accidents that make an image stand out. Something in the foreground created the blue glow… and I love that Clay wound up framed in by the arc from the front-of-house tent.

Captured from the catwalk, the rafters just happened to isolate Jimmy in a perfect fashion where the light leads your eye straight to the man himself.

The full stage setup on this tour is massive, and I love seeing it all from above. This production is huge, and it is forever impressive to me how fast the crew is able to setup and tear down this rig day after day/night after night.

A Close Encounters of the Third Kind shot was bound to make it into this year’s recap. I’ve had at least one in every best-of post. I’m imagining Sweets playing a drum solo here, only to have the aliens play one back. I think it’s safe to assume he could crack the code.

I shoot a lot of double-exposures on film… but this year began experimenting with the in-camera double-exposure feature on the 1DXII. My aim was to somehow incorporate features of the locality into the image to give a broader sense about where we were that particular night… and hopefully make a special image for those who attended the show who could connect with something that was clearly specific to that night. This was no easy task, because most venues don’t have features that can be clearly associated with that particular show. This double-exposure with the amusement park that sits within eyeshot of the venue, however… played the part perfectly!

The best example of this practice in-play was with this double-exposure of Zac and Jimmy against the leaderboard at Comerica Park in Detroit. Somehow even the color followed the Tigers’ suit, and the angle of Zac’s hat aligned with their logo. This effect was achieved entirely in-camera… and was met with several failed attempts. I can honestly say that getting this kind of image yields my personal favorite feeling in photography. There is truly nothing like it

Another moment from the same show as the sun began to set. Clearly… a magical night on this tour.

Always the most-animated and always fun to shoot… I never seem to tire of trying to capture Danny mid-throw!

These moments are another one that become difficult to get just right. With so many people in action at once, the planets have to align where you can see everyone in their element. In all honesty, it’s luck when it happens… but I’ll take it!!

The reverse angle on these moments however, has a much higher success rate. The magnitude of the shots at these stadiums like this never seem to diminish. This moment stands out to me because the crowd on the field is perfectly lit so you can see just how many people are experiencing this moment.

One of these moments has found their way into these annual recaps just about every year. I really love the stamp in time that the curtain artwork provides. Here we see Zac glancing down at the setlist moments before the curtain goes up to a sold-out stadium in Minneapolis.

The explosive energy from Coy was an easy pick for a top moment this year. Moments like this are about as rock’n’roll as you can get! See also: Gibson Flying V.

Matt making that bass sing at the edge of the thrust during the encore. The symmetry, framing, and frantic rim-light from the spot made this an easy stand-out for me.

I truly love when that spot hits just right. It’s another of many factors where the storm has to be perfect… but when it is it’s like bottled lightning.

I’ll wrap this year’s best-of with a moment from the last show of the tour. Moments like these feel so much larger than life. I always want to do them justice for the band members… and even more-so for the fans. To be totally honest, I fail… a lot. The world never sees those failures, but I promise they are there. But for all those missed shots and failed justice, there are a few that emerge that I know I nailed. This is one of those moments.

I truly feel honored when I am able to cement these fractions of a second in time in a way that doesn’t even seem real. In fact… none of any of this seems real. Which I feel is my greatest accomplishment with this body of work… that I am somehow able to translate that dreamworld into this reality.

Thanks for taking a trip with me back through this year’s top moments. I’ll see you on the road in 2019!