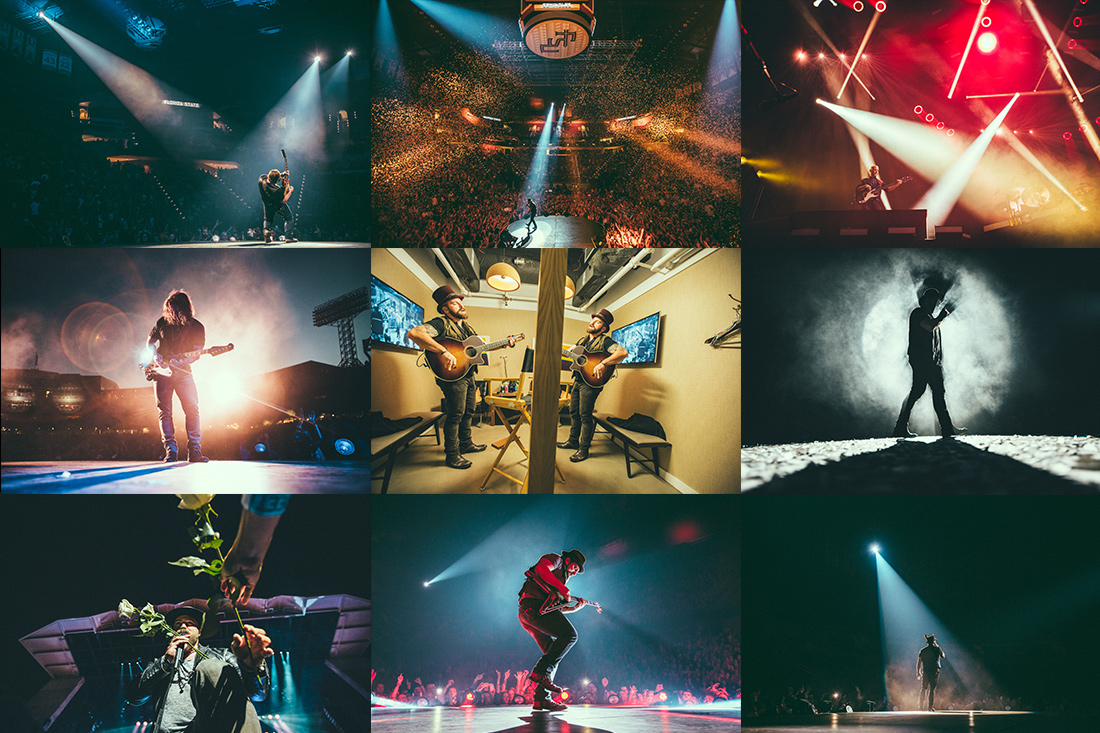 Another year has passed, and with it are some incredible moments from the JEKYLL + HYDE tour. My “Best Pictures from 2014” marked a monumental year for me as an artist. For 2015, I wanted to focus on refining my craft and bringing more of these surreal moments to life for the world to see. Buckle up, and let’s take a look!

One of the things I love to capture the most are the moments that nobody gets to see. This is one of those moments. Here we see Zac in his dressing room back stage at Saturday Night Live, warming up his voice before performing Heavy Is The Head with Chris Cornell.

For me, this photo was the official kick-off of the JEKYLL + HYDE tour. This was not only the beginning of a new tour… but the unveiling of a brand new album. The way the lights mirror Zac feels like he is releasing a monumental amount of creative energy into the world.

It goes without saying that as you travel around the world with people… you get to know them. Based on that, I happen to know that Matt is a big Star Wars fan. I love this photo because it looks as if Matt is calmly fighting off a sea of light sabers using only the sonic tones from his bass. That’s called using The Force, kids.

Great musicians know that there is equal strength in the notes that you play as the notes that you do not. Silence can play a powerful role in music. I think the same principle can be applied to this photograph. The darkness gives the light it’s strength here as it silhouettes Jimmy during the ‘Junkyard’ encore.

The spotlight and haze worked in harmony here to form what almost feels like an energy field around Zac on a confetti-filled stage. Easily one of my favorites from the past year.

The new stage-setup for the JEKYLL + HYDE tour found Chris atop a second-story drum riser… making him difficult to get in front of for photos. I managed to make my way along the front edge of the riser to frame him up around his drum kit. Right as a snapped the shutter, he made a face that is unequivocally “Sweets”.

I have to admit… I love concert photos that look like a UFO landing is about to take place. This photograph of John definitely fits that bill, and looks like a Close Encounter if I’ve ever seen one!

Danny is definitely the most animated performer I have had the privilege of photographing. He is always dancing, and as we can see here, jumping around. You can tell he is a man that absolutely loves what he does. Kind of like the guy who’s reflection you can see in the drum Danny is about to hit!

Here we see Zac behind the stage doors moments before walking out to a sold-out crowd. I love this photo because Zac seems reflective, but fully focused. I also love how the sunlight is peering through the LED wall to create definition in an otherwise extremely dark part of the stage.

A follow-up to the last photo… A vantage point from underneath the drum riser as the LED wall opens up and Zac takes the stage to a screaming hometown crowd.

A critical part to being a tour photographer is being in the right place at the right time. Every night I study the set list to formulate a plan-of-attack on where I need to be and when. Even still, you miss moments, and there is always an element of luck. This photo is an example of that luck, but also illustrates that you can create your own luck. A lot of white roses were given away on this tour, and I knew where I needed to be when that happened… however this was the one time I was lucky enough to be situated in just the right manner so that the girl was able to reach directly over my head to receive her rose.

While we’re talking about roses, here we experience a tender moment as Zac hands a rose to a young fan. From my point of view, as this happened, the spotlight hit her in such a way that her whole world quite literally lit up. One second later she hugged Zac before he helped her back into her father’s arms at the edge of the stage. Without question, a sweet and defining moment of this tour.

Another pinnacle for the JEKYLL + HYDE tour was the record-breaking three sold-out nights at Fenway Park in Boston! Zac Brown Band is the first artist to sell out three nights in a row.. and here we see Zac graciously throwing down in front of the iconic Fenway Press Box. There is a recurring theme in this year’s photos with what feels like a force of energy surrounding Zac.

Speaking of forces… Clay is one to be reckoned with! His musical prowess is unmatched, and here we see him mid-solo at Fenway Park. I love how the light flared almost as a visual representation of what is coming from the guitar. I knew the moment I snapped the shutter that this was going to be my favorite photo of Clay for the year.

Did I mention he can jump too? Here we see Clay and John jumping through the haze during “Free” at Fenway’s second night. Not many people know this, but I got extremely sick with dengue fever and wound up hospitalized after this show. I took this photograph with an insane fever, which makes it very special to me!

If I had to title this photograph from a ZBB song title, it would definitely be “Quiet Your Mind”. I love how isolating the spotlight is, essentially turning down the volume on everything else around it.

There is a big difference between shooting with a long lens to get close, and shooting with a wide lens and being close. I love this photo because as we see Danny peering through the chimes, you can tell just how close the camera really was.

Henri Cartier-Bresson was an early master of candid photography who birthed the concept of “the decisive moment”, where… as the artist, you are waiting for the “creative fraction of a second when you are taking a picture”. A lot of my tour photography employs this concept, but this shot of Coy might illustrate it best for the year. This photo wasn’t just about shooting him playing the solo… but waiting for the perfect fraction of a second where all of the elements that create an unforgettable moment are present. As Coy leaned back and bent the note, that moment revealed itself.

There was a LOT of confetti on this tour, but this shot from FSU landed itself as my favorite for the year. My brother graduated from this school in this very arena, making this photo extremely special to me!

It wouldn’t be right to list my top photos and NOT include one with a Flying V! The Gibson Flying V is my all-time favorite, and Coy is no stranger to them. Here we see him mid-solo during “Beautiful Drug”… one foot up, mid-stomp. I love the way this photo is lit… and I love that guitar!

Wrapping things up, I will leave you with a bonus photo. There is a world of images I shoot that most never see. A lot of them are of the road crew. Our particular crew is filled with the hardest working people I have ever seen, and the downright greatest group I have ever had the honor of working with. So while I am out there shooting the band night-after-night… sometimes the best photos… are of the people working tirelessly behind the scenes. In my eyes… we are all one BIG band… and out on the road everyone is worthy.

I am extremely honored and eternally grateful for the opportunity to be a part of that very road crew and for the privilege to document everything along the way.